The Rough and Tumble Adventures of the Kodachrome Kid 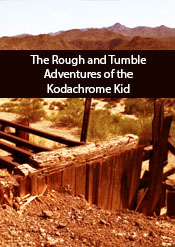 Scenes in America Deserta (1982) is not quite a novel, not quite a drama, definitely not a travel guide, really not quite an anything. The only close comparison might be the origin of the title, Charles Doughty’s Travels in Arabia Deserta (1888). However, where Doughty’s prose is insistently archaic, even by Victorian standards, Reyner Banham’s is accessible and elegant. Beyond the typical manifesto or critique, Banham studies the American Southwest with educated, purposeful enthusiasm, remarkable in its charm and cheeky humor. Solely on the strength of this writing, he takes what are essentially the ramblings of a wannabe cowboy and creates an outlier of architectural rhetoric. If absolutely forced to categorize Scenes, it would be best labeled as episodic narrative, the main characters being the author and the environmental qualities he studies (specifically the light, roads and colors of the Mojave Desert). By accepting this kind of narrative, the qualities start to become individuals, each with evolving wants, needs and personalities which allows for a deeper relationship with the writer and subsequently, the reader.

For Banham, the character of light is unignorable; it is aggressive and hauntingly beautiful, a vengeful antagonist that stalks him obsessively. The “hard grey light” we expect is a fiction. Instead the Mojave light is the embodiment of two opposing figures concentrated into one element all at once frighteningly powerful and delicately macabre. Here daylight does not represent the clarity of signified truth (as it might in the style of Turner or Rembrandt), but the “spectral and hurtful colourless light” of an all-seeing eye. It is a god who is in the judging-business, not the helping-business. When the sun goes down, the light transforms into the stuff of drugged supernatural visions. Reflections of a sunset off the salt plain are described as “Cherenkov”, glowing as if from a freshly-cooled atomic reactor. This unsettling aspect is addressed again in the description of Las Vegas. Through a boundless night, the mega-watt attractions make overly-cheerful promises of intelligent life, yet come morning, the sun shows the gaudy desert oasis will only make for ugly ruins. The duality created within this element encourages the reader’s ambivalence: Light is the announcer of unwanted reality and the creator of disembodied, loathing fear.

Unlike the shallow promises of neon signs and flashing bulbs, the open road guarantees real and pragmatic freedom, or at least, escape. So like many beat poets before him, Banham follows it out into the void, hoping to learn by experience. It’s no surprise then when the self-identified greenhorn becomes fascinated with the legendary Route 66. This road in particular is presented as the last relic of a golden age, broken and fragmented but still possessing “that magic which can stir the shallow places in one’s soul” an allure contrasted against the Interstate system, which is condemned as being the “mindless vandalism of MIT engineers”. The road is played like a character from a 1950’s Western, a fading has-been, long obsolete and looking for one last score. It is both human in scale and epic in purpose, meandering almost absent-mindedly around mountains and rivers, providing a place between banal safety and the certain death which graces the book’s cover. Route 66 lets the driver discover themselves under a protective gaze, like an old rodeo star of asphalt and paint, slowly fading into the sand.

Yet despite the influence of the light and road to Banham’s narrative, the most consistently discussed characteristic of the desert is the color. Initially unimpressive, it is portrayed in the first chapter as being somewhere between “iron grey”, “tan” and “dirty white”. Though as we dive deeper, the color begins to change into something more compelling. Suddenly there are “five different words for ‘red’”; the landscape is peppered with creatures “dark and golden-eyed” and horsemen “in splendid black”. Their relationship reaches maturity in Banham’s description of San Xavier Del Bac, “the most beautiful man-made thing in the desert”. As he describes it: “The whiteness strikes, hurts – but holds – the eyes. The two belfries above…blaze against the blue almost as if they fluorescenced…it is marvelous, never to be forgotten.” This burning white is a far cry from the novice, brackish neutrals and speaks as if from a Georgia O’Keefe painting. Sadly all these marvellous descriptions do not match with the book’s grayscale images. While most likely an unfortunate financial necessity, this may actually be a saving grace. It protects the reader from seeing the mean truth: that all the “Indian Reds” which were so overwhelming, in retrospect, still are those dull tones. We were the ones that changed, not the landscape. If the pictures had been in full color, the descriptions wouldn’t have matched either Banham’s words or our imaginations. It’s much harder to sell the wonder of a place when there is continual apology for perceived inaccuracy.

The landscape in Scenes in America Deserta is almost unrecognizable from beginning to end. Our esteem for the desert has grown and we feel as if we were there, trekking through the wilderness like one of the gang. Due to this sense of admittance, the conclusions reached regarding the desert and its architecture come off as the natural by-product of a group experience. It’s a wonderful, beautiful and deceitful trick. His narrative is so well rounded, so full, that our conclusions aren’t even ours, they’re Banham’s. The twist ending is that the author had a particular agenda the whole time; we were just too busy enjoying the ride to notice. Unlike the architectural writing of his contemporaries, Banham does not offer up his beliefs as dogma, apologia, or even in a direct manner. Instead, he chooses something akin to Saturday-morning cartoon heros, making it all at once personal, persuasive and strangely sentimental. We’ve been conned, and the best part is we don’t even care. Indeed we only realize it as the author starts driving off; abandoning us in the place we’ve somehow grown to love, while the sun begins to set. Gotcha.