The Name of Those Who Travel

to be given a name 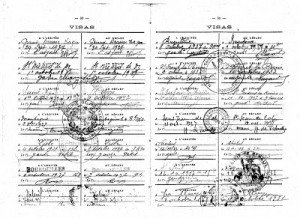 All the controversies associated with gens du voyage in France are related to the sort of baptism that inevitably comes along with the utterance of that name. Despite the historical efforts of sociologists and anthropologists to find a politically correct, and somewhat accurate denomination for the existing phenomena, problematics arise at the same moment that a term is intended to designate a community that never existed as such. Every now and then, outbursts of impolite sincerity and exasperation make their appearance on media, like the declaration of monsieur le maire of Maine-et-Loire, the MP Gilles Bourdouleix, last month of July; «Perhaps Hitler didn’t kill enough of them.» In France, gens du voyage do not have a straightforward definition; too often they are defined in negative terms, by stating first what they are not, as if they were hunted by clichés, under the shadow of multiple types of discrimination or confusion with someone else. To discriminate is to make a distinction and that is precisely what words are for. The act of coining a term is precisely the genesis of inequality, a declaration of the intention to define a boundary; the multiple claims for the contrary are by all means fallacious.