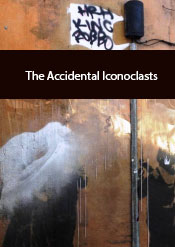 
“Art cannot be criticized because every mistake is a new creation”: this is the poster-dogma of self named street artist “Mr. Brainwash” for his first UK show, a reinvention of his premier show in L.A., Life is Beautiful (Old Sorting Office, New Oxford Street, Bloomsbury, London). Initially the spray painted image invokes an avant garde battle cry, however this call to arms may actually be an act self-defence, given the artist’s backstory. Mr. Brainwash came into the public eye via the documentary Exit Through the Gift Shop (2010) . Mixing the mythologies of Emperor Claudius and Darth Vader, an odd but otherwise harmless shop-owner becomes seduced by hype, media, and the benefits of being a dangerous Street Artist via his cousin, the artist Space Invader. To mark the metamorphosis, Thierry Guetta changes his name to “Mr. Brainwash” and via a large public show, betrays the Street Art community by stealing their ideas to gain notoriety. At the end of the film the viewer, like the other artists, is meant to mix revulsion and indignation at the commercial success of Mr. Brainwash. He is portrayed as someone who never truly suffered for his art or developed a style, a fraud. We’re meant to be mad not because he made money, but because he cheated.
In another warehouse across town from Life is Beautiful is its counterpoint: Urban Masters (Factory 7, 13 Hearn Street, Shoreditch, London). While Life takes place in a massive space nominally dedicated to the work of one person, Urban Masters is in a much leaner area that seems to have gathered an entire community of international Street Artists in alliance against Mr. Brainwash. The major figures of the fight being Shepard Fairey, Blek Le Rat, Sweet Toof and, of course, Banksy. Hidden down an alleyway, behind a car park, in a nondescript urban setting signified only by a small cardboard sign, Urban Masters wants you to know this is where the wild things are. One can’t help but identify this as a slap to Life, which stands beneath a 35’ high billboard depicting a punk version of a young Queen Elizabeth II, begging for the viewer’s attention. This juxtaposition is a visual conversation about what the two opposing forces think the movement should be about. For Mr. Brainwash, it’s a sly, if tired, series of pop culture references and in-jokes. For Urban Masters it’s a wry and satirical commentary on aesthetics and art itself. Mr. Brainwash may have a Gainsborough reference featuring Posh and Becks but Joe Black has a Chairman Mao portrait made of Seurat-style plastic army men. Despite Masters having the clout, and quite frankly the brains, to pull off what could potentially be an unfocused mess of a show, if you are new to the conversation both galleries may come off less as a war of rhetoric and more as a battle of the one-liners. The most important part of these shows is what neither gallery seems to address, the glaring change from what initially made the Street Art movement so fascinating and so famous: both shows are inside.
Full work in link below.