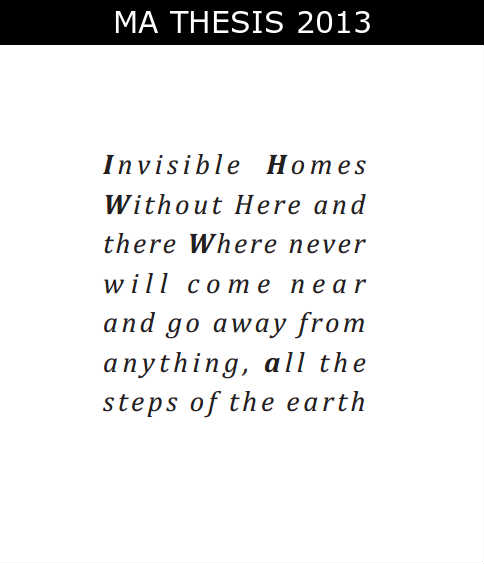 0
Prelude_ Field Hospital
A long never, ending night road slips beneath us and disappears under
the car. The ground of Tehran is escaping my grasp and as we get closer
to the airport there is less and less of it left.

– ‘I must hold the record of most trips to Imam Khomeini airport
without actually having left Iran. Well, apart from the airport Taxi
drivers that is, but they’re doing their job, it’s different’

This was Amirhossein’s way of lightening the weighing gloom that had
occupied the car. We laughed and then immediately remembered those
who had gone down this road and those who will soon make this trip.

Many are strapped to containers. They have swum the cold dark waters
of the English Channel to sneak into ferries and climb trucks disguised
in reflective aluminum foil. While drinking cheap liquor to warm up and
most possibly braven up before their final swim, they go over their
rehearsals and check once again the route. Laid out in front of them
drawn in pen and pencil is a map of the Calais ferry terminal that they
have configured through careful daily inspections. It is exciting, as if an
action film is about to unfold. But once they start swimming through the
chilled wet nightin their life jackets it is clumsy, dangerous, frightening,
almost doomed. Whether they make it to the other side or not they will
still be one ofthe non,existentlist ofthe unregistered many who escape
statistics and documentation; the uncounted. They endure so much for
the Promised Land1. Perhaps my plight wanes in the heavy shadows of
their exile.
Whatever the reasons and motives might be, whatever their impact on
what is abandoned and left behind, regardless of the place the
immigrant, the refugee, the expatriate comes into, ‘a man is running
from the worse towards the better. The truth of the matter is that from

exile―understatedly through the fragile and vulnerable act of writing:

‘Proof that inadequate, even childish measures, may serve to rescue one
from peril’10. I collect material sources sampled from many steps of the
earth, to which I anchor the story. I intend for them not to stand as
evidence, but instead to become embedded texture inside the
architecture of the writing. They stand in as form, and reflect perhaps a
different meaning―my reading, my story―to become an inseparable
part of the arrangement and mise en scene ofthe quilt.
***

I remember a long distance phone conversation with Amirhossein
months after I had left, he was telling me about a dinner with whoever
and whoever…

– ‘ Well dear it’s like a field hospital here, you have to make do with the
person lying in the next bed’.

He wrote to me that he would write a novel with that title.

Invisible Homes Without Here and There Where never will come near and go away from anything, all the steps of the earth_ Rojia