In From the Cold 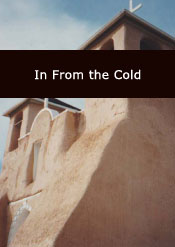 It is with a certain amount of inevitability that Reyner Banham, as a fierce advocate of the ‘Machine Age’, primarily registered man’s presence in ‘America Deserta’ through his excitement at the discovery of the technology and transportation networks in the Mojave Desert. Further examples mentioned of human interventions in this ‘stark, savage’ landscape included tree groves, dams and water-ponds, but other than a Spanish colonial railway station – ‘Mojave’s best surprise’ – and San Xavier del Bac, the ‘White Dove’ church, Banham declared the desert to be ‘devoid of any noticeable attempts at architecture’. Admittedly he had not set off on his mid-Western adventure with the mission of undertaking a survey of the vernacular, but having carefully considered the findings of his exploration, Banham observes that the ‘ordinary’ can seem out of place and that ‘neither Wright nor Soleri [has] produced structures that are, in any normal sense, sympathetic or proper to the desert. Both brought an inherently alien vision with them and imposed it on the desert scene.’ As found, without human intervention, the landscape of the desert is all-consuming in its relentless emptiness. ‘A believer might know that God was about, even when other men were not…[the] desert gives just enough water to sustain life, but not enough to be mistaken for generosity or to give pleasure.’

East of the Mojave Desert and North of the Chihuahuan lies a further expanse of arid land, not quite as parched and with a view to the mountains. The variation in scenery in no way reduces the power of the endlessly untouchable horizon. Amidst this desolation rise up buildings made of the land. Unlike the ‘churrigeuesque White Dove’ church and the train station of Kelso, these New Mexican adobe churches find a close affinity, not with past architectural styles that arose with the colonial missionaries but with peasant dwelling forms of the indigenous people. They return to the primitive, whilst embracing the Christian vision with an instinctive use of material as understood in local lore and used as found. The ‘White Dove’ that Banham discovered and celebrated was indeed itself once of brown mud but now ‘requires modern paint and modern upkeep: yet these material considerations – pigment chemistry and janitorial care – deliver an image, illusion if you will, of spirituality that devout Catholic, art lover, and everyday tourist alike can honor.’ Unlike this ‘incandescent vision’ of startling whiteness, the work of the community on the adobe churches grounds them firmly in the process of creating a tangible object from the desert dust that surrounds them. Most were originally built by members of the community as a labour of reverence using whatever materials were available at that time and the periodic ritual of re-plastering a church with mud takes hundreds of parishioners around ten days to complete. Built both for religious reasons and as fortresses against the indigenous population, the churches often take a simple classical single-nave or cruciform plan-form, and enjoy double-height spaces with a choir-loft. Whilst the interiors are also what one would typically expect from a missionary church in a new land, the artifacts brought by the priests from Spain were gradually phased out, replaced by local craftsmen and their own interpretations. Santeros, the sanctuary caretakers were artists who painted the images of the patron saints and local carpinteros provided the priests with joinery in the form of alter railings and pews. The church exteriors are, when at their best in terms of structural honesty with massive adobe walls, bell towers and buttresses, powerful, symbolic and moving in this harsh land, tied strongly to local native-American tradition and community beliefs. ‘The desert is where God is and man is not’? God can only live where man already is.

The image of the church rising out of the land is immediately coherent, both as a symbol of man’s faith and of his temporal relationship with the Earth. Banham could not conceive of a ‘beautiful’ desert through the consideration of either the enormity of space or of the constructions of man in their respective isolation. However, through their connection and joint identity, a new perception of the sublime starts to emerge; one that heightens an understanding of the power of the human race whilst exposing its insignificance in nature. The overwhelmingly moving presence of the adobe church seen across the piazza of wilderness is identifiable by both its usefulness and its meaning; a shelter, safety, a place of belonging and congregation – whether religious in the traditional sense or not – and, furthermore, as a representation of man’s endeavour to create and inhabit. The sensuous use of materials ‘as found’ with an honest expression of structure, a rational plan, and a formal, instinctive use of proportion combined with the legibility of image, work naturally together here. And so, the elucidations of the New Brutalists as defined and celebrated by Reyner Banham and the Smithsons’ have occurred ingenuously before, in other times and places, without the self-consciousness or deliberation of being in a style or within a movement. According to Banham, ‘it is this reverence for materials – a realisation of the affinity which can be established between buildings and man- which is at the root of the so-called New Brutalism.’ And as the Smithsons’ found in the ‘anonymous architecture of simple, rugged geometrical forms, smooth walled and small windowed, unaffectedly and immemorially at home in its landscape setting’ of the Mediterranean, the adobe churches have kindred qualities. It is these qualities that illuminate its immortal image, perfectly at home; an ordinary and heroic architecture.

Y Despues        And After That
Los laberintos    The labyrinths

(Sólo queda    (Only the desert

(Sólo queda    (Only the desert

Sólo queda    Only the desert