Cloudy with a Chance of Metaballs 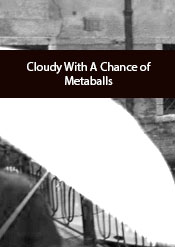 A true Englishman never leaves home without his umbrella, it is said; and that would suffice to assume that Reyner Banham always carried his along, even when crossing the Mojave Desert. Raised in a different climate, he came to venerate arid dryness, eventually letting it widen his own perspective. Having observed technology and architecture interpolations during the 20th century, he didn’t outlive the third Machine Age, ultimately missing the chance to introduce himself to the fourth: the much anticipated Digital Age. It is unfortunate though that one’s passing away should deter him from doing cherished activities – especially when those require more time than one’s lifetime. Perhaps Banham could keep on cycling through this planet’s deserts, contemplating on the attempts of man to claim their territory. Thus paying homage to the man who instigated his travels, he would most certainly visit the Arabian Desert, which Charles M. Doughty first described in a mixture of zest and reverence. This particular visit would also reserve him with an unexpected and interesting encounter – for more than a hundred years after Doughty’s last visit, the desert gave birth to a child. The child was promptly named King Abdullah Petroleum Studies and Research Center and was baptized into the doctrine of Parametricism. Despite Doughty’s and Banham’s expressed affection for the “mother”, paternity was claimed by Patrik Schumacher on behalf of ZHA. The KAPSARC (as it was soon known among friends and family) was to signify the successful transition of architecture into this brand new style of design.

It is the fate of the pioneer architect to have trouble communicating his message by means of his work alone. Probably for this reason Schumacher had to resort to expressing his architectural visions in written form – and make sure that the message will be heard. Following in the footsteps of others before him, he authored a perfectly crafted manifesto, complete with dogmas, taboos, war declarations and the lot. He also stated the belief in Parametricism’s ability to cross phenotypical variants while retaining a genotypical coherence. This could actually be quite a feat to accomplish; and once it is done, it permits for organic, leaf-like formations to spread amidst the sand dunes, where it never seems to rain. One calls to mind Banham’s own attribution of Stirling and Gowan’s work – in this case, Schumacher could be credited with coming up with another style for the job. But can a research center in the Arabian Desert, a private residence in a Russian woodland and an office complex in a Mediterranean metropolis qualify as part of the same job? More likely, he is creating jobs for the Style, inventing parameters where there are none, and flattening cultural and topographical diversities alike with an animate high-performance steamroller. Perhaps that would be the only way to cope with the ambiguity of a post-Fordist society; and Schumacher has made clear that he despises the infinite complexities that Postmodernism disclosed to humanity. On the other hand, a blatant irony such as one of a sustainable and environmentally friendly Petroleum Research Center is only worth in a Postmodernist era. Yet this search for a universal and easily identifiable architectural matrix has been haunting the dreams of the profession’s most restless members since they discovered their role over society. Sometimes this matrix has a distinguishable form; at other times a definite purpose. Isn’t that what the much anticipated in mid-20th century architecture Autre was all about? Now cutting-edge technology comes to the aid; and as automobiles rushed in the modern cities shaping along the internal urban boundaries, this time invisible yet omnipotent vectors render contemporary buildings smooth and malleable. The parametric matrix is certainly of the first kind. Such a style has the right to deny historical paradigms as it tries to forge new affiliations with all aspects of architectural endeavor. More self-righteous than self-referential though, sneering at the demise of its predecessors, it disregards the fact that it was Modern Architecture that took a bitter lesson during the post-WWII period: aesthetic canons and social change can be quite uncompromisable.

At this point, Banham cycles past the KAPSARC, probably attributing its crystalline presence to the combination of desert heat and dehydration. After all, technology may have helped architecture to form a closer relationship with the environment, but in the end it cannot compensate for its shortcomings. This does not necessarily imply that it’s technology’s fault. A man whose scientific work permeated both the first and the second Machine Age famously said that problems cannot be solved by the same level of thinking that created them. There are certain issues (sustainability is just one of them) that in all likelihood are inherent to the nature of the building process. Their solution lies farther away than a mere choice of designing style; albeit closer to the perceived objective of architecture itself. It has cultural and geographical aspects that are eagerly overlooked through the prism of technology and ecology. Of course, this means that maybe the real war must again be fought in the fields of architectural autonomy – for the right of architecture to make use of its own parameters in dealing with the built environment. That would vindicate Banham in his castigating Modernism for the fetishistic regard of mechanical engineering – presently, it’s Parametricism that employs computer engineering as an alibi for preferring cheap sensationalism over the search for a solution. Its claim to fame hints that it is mainly motivated by its creators’ personal ambitions. What Patrik Schumacher (along with his fellow ideologues) fails to realize though is that by the uncritical admiration of digital technology, he identified architecture with a differently oriented field – altering once more the relationship of the architectural profession with society. Overindulging in all sorts of digital jargon, he eagerly opened the black box of architecture to the public, only to reveal a content of nurbs, blobs and metaballs. As Reyner Banham rides off into the distance, his rolled umbrella in hand, the architects of the fourth Machine Age are left behind, wishing upon the fallen stars of formalism.