‘… not far from London Bridge, you will find a towering, and more modern, column, which is simply known as ‘The Monument’. It was designed as a memorial of the Great Fire, which broke out in that neighbourhood in 1666 and destroyed a large part of the city. These monuments, then, resemble hysterical symptoms in being mnemonic symbols ¹.’

The Monument – capitalized – with an emphasis on the the – not the monument, but thee Monument. The one, not just any. One single pillar. A most primordial form of architecture. If even: in a sense it seems closer to the hand of a clock, than to a building. A single line, a vector. An index pointing out something. Where is it pointing to? Well, geometrically it must be close to (0,0,1) – but in terms of the socio-economic, political and technological conditions of its conception, construction and reception? Superficially the Monument is merely a doric column – with no load to bear. Except a golden urn on its top. What is buried inside there? What is entombed in this monument? The full name alone provides clear evidence here: The Monument to the Great Fire of London. The ashes inside this cinerary urn must then be the remains of London, and the Monument thus a tribute to a great loss. Well, in a way, but definitely not through and through ². Commemoration is engraved in the Monument’s inscriptions and ornament, but they also identify it as a symbol for a resurrection. So then, unlike its ancestors which commemorate the victory over another nation, this column monumentalizes the overcoming of a situation – and the constant advancement from thereon. As a marker to the future, a symbol of progress and growth. In this sense it appears almost as the prototype for its phallic epigones (bearing equally concise, though somewhat less dignified, titles: the Gherkin, the Shard, the Walkie-Talkie), in whose shadow it now stands. Usually these more recent exemplars are primarily seen as manifestations of financial and technological progress, while the older, venerable monuments of London appear as celebrations of the Kingdom’s – and later the Empire’s – glory. Although the Monument most definitely is a tribute to the royalty, it concurrently (concealed on the inside) epitomizes technology and science. And there are more ambiguities: the questions about its authorship, about who administered it, et al. Thus while the column appears so pure, it is actually utterly ambivalent – in a constant state of ambiguity: of both … and, neither … nor. But let’s not prejudge – first the stumbling block itself should be observed and forensically analysed. Maybe then one can draw some conclusions on the extraordinary position this structure holds in respect to the emergence of London as a modern metropolis – and as an index to its continuing transformation…³

2.  Even though tomb and monument have obviously always had a unique connection: ‘Only a very small part of architecture belongs to art: the tomb and the monument. Everything else that fulfils a function is to be excluded…’ A. Loos, ‘Architecture’ (1910) 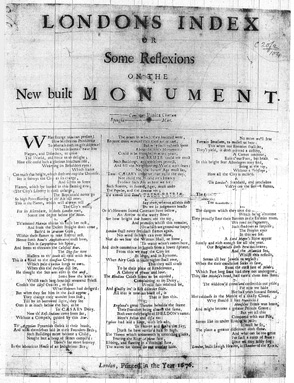 3.  …
See it surveys the City as its charge,
And seems to scorn
Flames, which lye buried in this flaming urn;
The City’s liberty it doth enlarge,
The Boys could never go
So high Processioning in th’ Air till now.
This is the Planet, which will always tell
The City’s well;
For its Ascendant, it doth London own,
Scarce one degree below the Moon.
…
Anonymous, LONDON’S INDEX OR Some Reflexions ON THE New built MONUMENT (1776)

Posted on February 3, 2014 by Winston Hampel

Winston Hampel studied in a number of places and worked with different practices and various academic, cultural and social institutions, before enrolling in the History and Critical Thinking programme. While his general interest is in the interrelation between cultural artifacts and conditions, ideas and narratives, he most currently focuses on referring to himself in the third person.