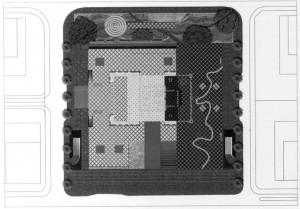 In a time where urbanization takes command, it is the plinth which becomes the critical line on the battleground.
The city exists under a constant state of attack, from all directions, and this has not resulted in one Ground Zero,
but multiple ground zeros. We should therefore know that a certain ground zero is not only to be understood as the
point of detonation, but also as the center of rapid, intense, even violent activity or change. So, what kind of
architecture can exist on such a site? And how can the plinth, as essential joint with the ground, still manifest
itself? Therefore, in this short investigation, the central question is asked: where has the plinth gone? By looking
into the relation between building and site in three recent projects (Ground Zero Master Plan – Studio Daniel
Libeskind; 30 St Mary Axe – Foster+Partners; Shenzhen Stock Exchange – OMA), it becomes apparent that
the plinth, or at least that what it symbolizes, still plays a crucial role. Moreover, we could go as far as to say that
it is the plinth which might soon take back the command…

Buildings seem to solidly touch the ground, or at least this is what appears to be happening in and through the plinth.
We should take a deeper to look, though, to understand what this means, seeing that the plinth is an entirely ambiguous
element of architecture. The plinth represents a solidity in that it is the base, the substance on which all loads of
construction rest. It is understood as the foundation anchored to the bedrock, and thus the lay-out of the plan; literally
the footprint of the building on the ground. But it is also that what appears to be the base (the original crepidoma),
in so far that it represents “the symbolic possibility of confrontation[1]”. In a typical urban context, it is therefore the
boundary on ground level, the critical line in between public and private space, where the subject constitutes its image
of place.

As a result, the plinth always exist in between  a set of dialectics. It lives in between interior and exterior, private and
public, security and risk, control and freedom, substance and image, performance and representation. In this sense,
the plinth belongs as a means of what Foucault describes as “the apparatuses of security” through which a milieu is
produced out of the multiplicity[2]. This means that out of a set of natural and artificial givens, a plan should be generated
in which uncertainty can be given a specific place, namely the place of security. In this sense, the plinth constitutes an
artificial hold on life as it happens through architecture. It therefore does not only impose a boundary on the inside of the
building, but it will also be used to extend the conditions of that inside (the interiority) outside itself.

As we take Sloterdijk’s allegorical image of the exclusive neo-liberal party that was happening throughout the last two
decades, we should also not forget that this party implies a guest list[3]. The invitations are limited and selection is based
on cultural realities which determine in a very strict and specific manner the place of security. We should therefore realize
how far not only the form but certainly also the image of the plinth extends in space, setting up an architectural frame
within the city which organizes both exchange and containment of those who live within. How the plinth appears, i.e. the
conditions of its apparition, therefore has a profound influence on how the subject, in this case the passerby on ground
floor, constitutes a specific context out of the multipli-city.

Maarten Lambrechts received his Master degree in Architecture in 2013 in Antwerp, where he also briefly worked for a small architecture office. In his thesis ‘On Effect in Architecture’ he explored his early interests in architecture theory, and this eventually … Continue reading →

Posted on February 3, 2014 by Maarten Lambrechts | Leave a comment