A Man Who Knew Too Much 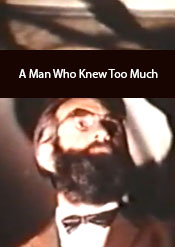 “Visiting   houses  in  Beverly  Hills  or  Bel  Air   can  be   an  hallucinating   experience;   an overwhelming  sence of déjà vu mingles with an overwhelming  desire to sidle along corridors with one’s back to the wall and to kick doors wide open before passing through.” More like scenes rather than anything else is Banham’s interpretation of the Western metropolis  of the West. Standing so far away from his Englishness and the strict academic role of the historian enables  him  to  experience,  question  anything  absolute,  and  to  create  une  histoire  autre about architecture  and the city. Like others before him, he comes from another tradition;  he is an outsider, a foreigner,  an immigrant  of academia. Away from another émigré, his master Pevsner and the German thought  forced on him, he grows younger and unconventional;  an intellectual  hippie who tranforms from flaneur to chauffer. He gives up his beloved  Bickerton, gets a driving  licence and a car in order to “read Los Angeles in the original”, echoing  the earlier generations  of English intellectuals  who taught  themselves Italian in order  to  “read Dante  in the  original”.  “I  love  the  place”,  he states just before  he enters his car, “with  a passion that goes beyond  sane or reason”, then turns on the engine and drives through  the coasts, hills, valleys and freeways in order  to reveal another  reading  of the city through  his brand  new original  eyes. Always at the  edge  of the  world  and in a different  direction,  he goes on and identifies  his four ecologies not only as places or monuments  to explore by car but also as places where architecture satisfies no need in most cases but emerges in the sake of a dream, or what he calls “the great middle-class suburban dream”.

Hollywood,  West Hollywood,  Beverly Hills and Bel Air – all hills thus rich suburbs, “the higher the ground the higher the income” – are places so entirely different  from Norwich, the city he was born  and grew up. Bel Air sounds like the dream place to live, even the name itself is persuasive enough  to a sun-loving  Brit, like Banham, who had to suffer from  the Toxic Air and  the  gloomy  weather  of  London.  Even though  L.A. is nothing  like  Norwich,  London, Europe  or  even  the  cities  of  the  American  east  coast,  he  has a robust  memory  of  this particular urban landscape, a sense of familiarity  and an overpowering desire to expose the uncanny. Los Angeles has little history to demonstrate  but many stories to tell. The cityscape is  more  like a dreamscape  and the  architecture  being  re-framed  through  the  planning  of directors,  production designers,  and set decorators,  is no longer  part  of everyday life but part  of  a narrative.  If then  the  scenographer  replaces  the  architect  in  the  same way the director   can  take  the  place  of  the  historian.  In  that  sense, Banham,  the  man  of  many disguises, writes a script  instead  of  history  which  then  turns into  a movie.  A real pioneer hippie;  he leads the way, re-establishes the new age hippie  trail and takes along the reader- viewer  to  an hallucinating  trip.  In the  place  where  anything  is possible,  a hi(ppie)storian under the effect of his drug  – criticism – can see what’s already there in a different  way but always aware of  his altered  perceptions.  Whimsical  places, surreal experiences,  fantasies, desires, and dreams, are elements all waiting to be re-discovered.  In retrospect,  it all derives from  Hollywood, anything  found  there  is enriched  by its creative  spirit.  Without  a doubt, Banham  acknowledges   the  great   impact   cinema  had  on  his  perception  and  way  of interpretation but  then  again he aims to  be  critical  about  it.  The scene where  he visits a house in the Hills, inspired  by the cliché scenes in private  detective  movies of the 40’s is a pure moment of sarcasm and criticism. He promplty becomes both a narrator and actor, so it stays unclear whether  he wants to  be  Alfred  Hitchcock,  Humphrey  Bogart  or himself;  the music of Vertigo playing in the background  on the one hand and a heroic detective  Banham figure solving mysteries on the other.

An Interpretation of dreams; that’s what L.A. is all about, it’s a frame through  which one can understand the city, “it’s a frame of mind”. Enough about the city though,  another dream in desperate  need of interpretation is Banham’s. It is extremely  hard to read Banham’s mind, the only thing  clear about  it is that his intention  to write a manual of the city is probably  an explicit lie. His mind’s eye emanates from a fusion of history with present, reality with fantasy, integrity  mingled  with humor and irony opposed  to ideology.  In other  words he slips away like a lizard or like a chameleon reliant to the environment.  As his biographer  Nigel Whiteley would  say he transformes  from  working-class  intellectual  to  pop  professor  and  then  to  a cowboy.  Reading  L.A. is an attempt  for  him  to  show how  he fits  in, better  than  anyone before and around him; his narrative is well staged and it involves himself as much it involves the  city.  Looks like it  is not  certain  if Banham declares his love  for  L.A. or the  other  way round. He happens to be talented  in many ways, he is an historian, critic, professor, pop  art lover, screenwriter, director,  actor, hippie, and junkie among all the other things. What needs to  be  brought   to  everyone’s  attention   though   is  that  Banham  is  a  fake.  He  is  not  a chameleon  nonetheless but  a man with many costumes or disguises, which becomes more evident  during  his cowboy  phase. “He  looked  liked  he had just stepped  out of a western, like  a  cowboy  straight  out  of  central  casting”,  says Tim  Street-Porter,  “he  was kind  of overdoing  the whole look – Stetson, cowboy  shirt, turquoise-studded belt, jeans, shoestring tie, the whole  effect  contrasting  bizarrely with  his East Anglian  accent. It was his signature uniform  and made  him look  startling  and really quite  impressive.”  What Banham is going through  in the  70’s can not  be only  accredited  to  a gradual  Wild  Westrnization,  it seems more likely that he is dealing with or faking even a Post-middle age crisis.