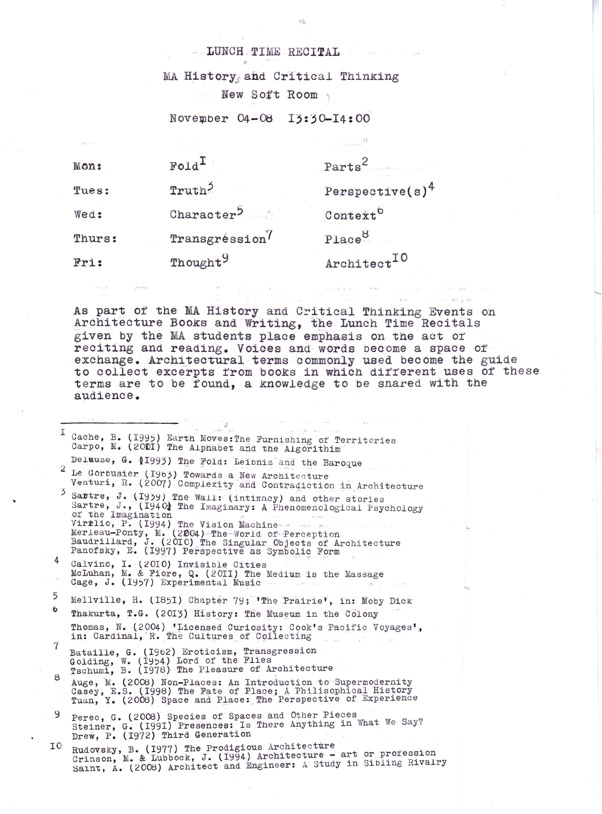 “What produces the impact must have soul in it and must be accompanied by an act of imagination, for voice is a sound with a meaning, and is not merely the result of any impact of the breath as in coughing;” (Aristotle 2001, De anima, 420b 28-37)

At a time of a pervasive global intelligence, what are the forms of participation in an economy of knowledge, a highly organised system of authorship, production and distribution, which is not limited to the world of solid, stable objects? How can a credible voice be established?
The voice appears to be the most familiar thing. We are surrounded by voices. Yet, the omnipresent use of the voice in our everyday and social life without any further qualifications hinders the shades and powers of the voice. The voice is not a sound, it carries meaning. It is the vehicle of meaning, the agent of enunciation. In its individual qualities, accent, intonation, timbre, a voice can also be the source of aesthetic interest.
Beyond linguistic features and distinctive traits, however, another way to be aware of the voice is through its very materiality, which, in its particular modulations and inflection, can turn the meaning, transform it into its opposite and ultimately decide the sense of the whole. This voice persistently assumes an intimate link with the very notion of the subject – the author, the orator, the architect, the institution; a subject which becomes a mode of the articulate, and constitutes itself as the community.
The texture of this voice, the words it uses to slice the world into the classes of nameable objects, the forms it produces to make a communicable experience, is what establishes articulations between what is posited and what is meant by it, between the (utterable) sayable and the visible. Or else, a particular discourse, an exchange of signs, sequences, enouncements, even silence, which introduces the listener not only to the material but to a process of thinking, thinking in common.  Is not this close circuit by definition a pedagogical practice, which covers at great length the modalities of architectural practice too?

On this account, as part of the MA History and Critical Thinking events on books, writing and the voice, the Lunch Time Recitals given by the MA students place emphasis on this particular practice. Words –oral and projected, voices and still images weave into a space of exchange. Ten terms commonly used – thought, fold, truth, perspective(s), context, character, place, transgression, architect and parts – prompted a collection of quotations in which different meanings are to be found and shared.
What such an event evokes is a different entry into the problem of the voice through an old (and historically prevalent) practice of reading, deeply involved in the constitution of the space of the community, i.e. the constitution of the political.  The words, carefully collected are intimately linked with the performative power of the speech. Yet this apparent openness entails a reversal, a space where the outside is not presumed to exist.  The very process of enunciation positions the multiple voices (the author, the reader, the listener, the school) and presents itself essentially as a dispute over their proper locus making effective a public space which cannot be found anywhere in the statement, written or oral.

1         Recital  A telling in detail and due order of the particulars of anything, as of a law, an adventure, or a series of events; narration / That which is recited; a story; a narration / The act of reciting; the repetition of the words of another, or of a document; rehearsal; as, the recital of testimony / (Law) The formal statement, or setting forth, of some matter of fact in any deed or writing in order to explain the reasons on which the transaction is founded / (Mus) A vocal or instrumental performance by one person; — distinguished from concert.

The verb cite (to summon) comes from the Latin citare, from ciere, from cieo (to move, set in motion, stir, move), which is a transliteration of the Greek verb cieo/cineo (I move, stir, rouse, summon; Gr: κιέω/κιώ/κινέω).

See all posts in News
This entry was posted in news. Bookmark the permalink.